Geek, climber, voracious reader and lover of Rock, alternative, classical and other music. I was fortunate to see some of the best musicians ever in relatively small venues.

The Allman Brothers Band, formed in 1969 in Macon, Georgia blended strains of Southern Rock music - Blues, R&B, Country, Jazz, and Gospel - into a flexible, jam-oriented style of Rock and Roll that reflected the emergence of the “New South” and set the style for Lynyrd Skynyrd, the Marshall Tucker Band, and countless other Southern rockers. Oddly - or eerily, some would say - the band’s unusual string of untimely deaths has been repeated in other Southern-rock bands. 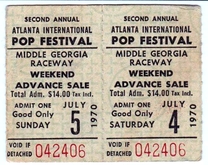 It was a wet day in atlanta but we didnt care.the rain didnt stop Anything.let the shrooms flow...lol