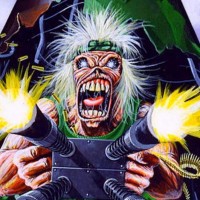 Poison is a glam rock band from Los Angeles. Formed by drummer Rikki Rockett and singer Bret Michaels. they started out in Pennsylvania in the early 80s. Their first band together was called the Spectres. They left the Spectres and started Paris with bassist Bobby Dall. They then moved to Los Angeles, where they parted ways with guitarist Matt Smith. Many people tried out for Poison's vacant lead guitar spot, including soon-to-be Guns N' Roses lead axeman Slash.

0 users have seen POISON including: