hard to believe this was 30 years ago! the brandos opened, they did a song called Gettysburg which I thought was very cool, since i'm into the civil war. then it was the outfield, which were really good, of course the highlight was their big hit, your love. Then the headliner INXS, who were awesome, the KICK album sent them into the stratosphere, so many hits on that album, my parents got it on vinyl for me for either my birthday or Christmas that year. I wouldn't have dreamed it that night as an 18 year old freshman at Shippensburg university but my girlfriend (who was there with me that night), would pass away 10 years later at only age 29 and sadly Michael Hutchence(only 27 years old that night), would die 10 years later also. It really makes you reflect on your own mortality. The pic below is of me in front of the venue, heiges field house on ship campus, I took it 30 years to the day after concert.

No videos have been added 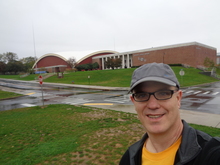 @Ship Alum. The Outfield had been to Ship at least twice before that. I think the first time was as an opening act for The Fixx (1984? 1985?) and then they headlined the second time I believe.
-Ship Alum ('87) who worked on the concert committee

now you have me second guessing myself arielh, I will try to see if I can confirm this.

The Outfield didnt open for INXS, they were the headliner of their own show at Ship. Believe me, I was in the Concert Committee and help hold the barricade up in the security line front and center at that concert. Michael Hutchence kept throwing cups of water that would hit me.