Growing up in Boulder, Demi Demitro rebelled through her guitar, practicing up to nine hours a day and neglecting schoolwork to develop a playing style that is heavy but agile, theatrical but nuanced, grounded in rock history but wholly idiosyncratic. With Baby Pottersmith and Jonny Fig playing on a conjoined set, the band developed a reputation for their rip-roaring performances. Clips of the band’s live shows and DIY videos made it back to Dan Auerbach, who invited them to his studio in Nashville to produce Nightmare Daydream. 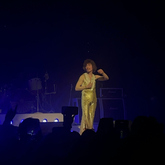 274 users have seen The Velveteers including: