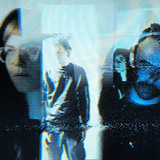 Infinity Shred is an electronic and post-rock trio from New York City comprised of Damon Hardjowirogo (synthesizers, visuals), George Stroud (drums), and Nathan Ritholz (guitar, synthesizers). Up until April 2012, the band was a duo of Hardjowirogo and Stroud known as Starscream; the group's name was changed due to "unfortunate legal circumstances," while Ritholz (who previously contributed to Starscream's Future, Towards the Edge of Forever) also became a full-time member.

11 users have seen Infinity Shred including: