The Hurt Process is a British and American metal/rock band. After two top-selling full-lengths, 2004's 'Drive-By Monologue' and 2005's 'A Heartbeat Behind', and a few member changes, the band decided to call it a day in September 2006. This band is for fans of emotional music and metal alike for their crushing beatdowns and soaring vocal harmonies which manage to draw from influences as varied as Thursday and Killswitch Engage.

The Hurt Process has 9 concerts 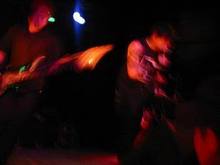 8 users have seen The Hurt Process including: