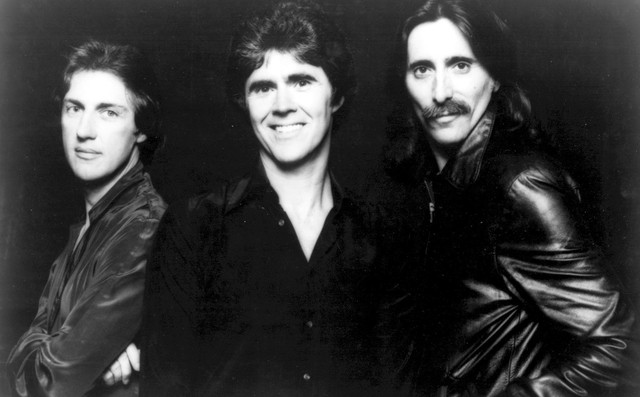 Three Dog Night is an American rock band from Los Angeles, California best known for their music from 1968 to 1975, during which time they achieved twenty-one consecutive Billboard Top 40 Hits and 12 consecutive Gold Albums. Three Dog Night are still active in 2012, touring and recording 43 years after their first album was released. The first of the band's 7 million-selling singles was One in 1969. They scored three number one singles: Mama Told Me (Not to Come), Joy to the World and Black and White. 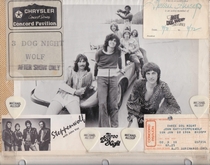 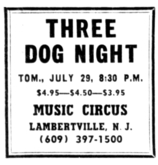 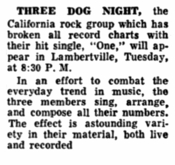 When did Three Dog Night perform in Anderson, Indiana? first concert with now wife of 47 years. It's not listed on concert archives.????

Does anyone remember 3 dog night performing at Butler Univ....Clowes Hall...Indianapolis in either 1969 or 1970?

What genre is Three Dog Night?

Three Dog Night merged several distinct sounds together to produce a unique blues-infused pop rock sound with hits like “One.” The band was also able to differentiate its sound and even integrated gospel hymns into their repertoire as is evidenced by their critically acclaimed cover of “Joy to the World.”

When did Three Dog Night start?

Three Dog Night formed in 1967 and was originally called “Redwood.” In 1968, the band formally changed its name to “Three Dog Night” and released their debut self-titled studio album on October 16, 1968. The album peaked at number 11 on the Billboard 200 chart in the US and produced three hit singles including “One,” which reached number five on the Hot 100 chart in 1969.

Where did Three Dog Night form?

When did Three Dog Night break up and why?

Persistent band disagreements, as well as substance abuse among the members, led Joe Schermie, the bassist of Three Dog Night, to leave the band in 1973. In 1974, another two original members left to form a new band with more original band members leaving in 1975 and 1976.

While they were all replaced fairly quickly and the band continued creating new music, there were other difficulties. In addition to regularly churning members in and out from the band, Chuck Negron, one of the founding members was arrested for narcotics possession in 1975. Additionally, the band failed to promote 1975’s Coming Down Your Way or 1976’s American Pastime well enough to sell many units. As a result of these and other factors, Three Dog Night officially broke up on July 26, 1976 after a show at Los Angeles’s Greek Theater.

Five years later, all of the original members, except Schermie, reunited. Three Dog Night’s second iteration has lasted over 40 years.

How did Three Dog Night come up with its name?

Actress "Ajax Lady" (June Fairchild), is rumored to have come up with the band’s name. It is said that while dating founding member Danny Hutton, Ajax read an interesting article about Aboriginal Australians embracing wild dogs during cold nights to stay warm. In fact, “Three dog night,” is still used to describe a very cold evening. It’s rumored that Ajax Lady thought this name was fitting for the band and suggested it to Hutton who readily agreed.

However, others disagree with this account. For example, Van Dyke Parks, a former music arranger at Warner Bros Records states that he was the one who suggested the band’s name, noting that Ajax Jack didn’t even read about anthropology or know anything about Aboriginal Australians.

How many Top 10 hits did Three Dog Night have?

Three Dog Night released 11 Top 10 hits in the US:

Of these hits, three would reach number one: “Mama Told Me,” “Joy to the World,” and “Black and White.”

How many original members of Three Dog Night still perform with the band?

Of the original members of the band, only one still performs with Three Dog Night: Danny Hutton.

What songs did Randy Newman write for Three Dog Night?

Which members of Three Dog Night have passed away?

Three Dog Night first started in 1967 with many of its members born in the 1940s or ‘50s. As a result, several members have unfortunately passed away including:

How many concerts has Three Dog Night had?

When is the next Three Dog Night concert?

The next Three Dog Night concert is on October 06, 2022 at stephens auditorium in Ames, Iowa, United States.

When was the last Three Dog Night concert?

The songs that Three Dog Night performs live vary, but here's the latest setlist that we have from the September 15, 2022 concert at Gruene Hall in New Braunfels, Texas, United States: