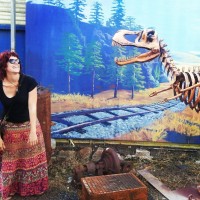 The Peep Tempel are a three-piece Rock ’n’ Roll band from Melbourne, Australia. They released their second album Tales in 2014. The band originally formed as a two-piece in 2009 and developed a reputation within Melbourne for their unrelenting live performances. In 2011, Stewart Rayner joined the band on bass. As a three-piece, the band have continued to develop their distinctive sound, built on their intense live performances and song writing.

40 users have seen The Peep Tempel including: