In 1994, following the disbandment of Nirvana amid Kurt Cobain's suicide, former drummer David Grohl founded the Foo Fighters, recruiting Nate Mendal (bass), Pat Smear (guitar), and William Goldsmith (drums). The band's first live performance took place at the Jumbalaya Club in Arcata, California on February 23, 1995. Later that year, the band released its self-titled debut album, which spent 51 weeks on the US BIllboard 200 charts. The following nine studio albums each peaked within the Top 10, with 2011's "Wasting Light" and 2017's "Concrete and Gold" reaching the number 1 spot. In 2021, the Foo Fighters were inducted into the Rock and Roll Hall of Fame by Paul McCartney. This was David Grohl's second induction, the first being with Nirvana in 2014. Both Nirvana and the Foo Fighters were inducted into the Hall of Fame during their first years of respective eligibility. 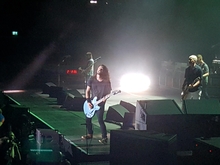 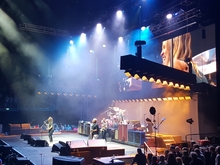 4234 users have seen Foo Fighters including: