Metric is an indie rock/New Wave band formed in 1998 in Toronto, Canada. The band members are Emily Haines (vocals, synths, guitar, tambourine), James Shaw (guitar, synths, theremin, backing vocals), Josh Winstead (bass, synths, backing vocals) and Joules Scott-Key (drums). The band name was inspired after a sound called "Metric" that was programmed by Shaw on his keyboard. They were based at various times at Toronto, Montreal, London, NYC and LA. 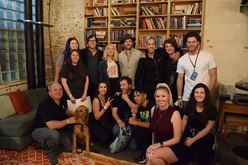 Shiny And Oh So Bright Tour
Uploaded by Shinigami3y3s

718 users have seen Metric including: