Josh Freese was born on Christmas Day, 1972 in Orlando, Florida but has lived in Southern California since he was 6 months old. Having been brought up in a musical family (father conducted the Disneyland Band and mother was a classical pianist) he was surrounded by music from an early age and began playing the drums around the time he was 7 or 8 years old. He started playing professionally at the age of 12 (in a Top 40 band at Disneyland) and starting touring and making records at the age of 15, first with Dweezil Zappa and then The Vandals. 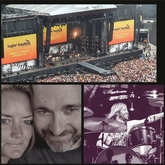 31 users have seen Josh Freese including: