Steven Wilson (born Steven John Wilson on November 3, 1967, in Hemel Hempstead, Hertfordshire, England) is an English musician, singer, songwriter and record producer, most closely associated with the progressive rock genre. Currently a solo artist, he became known as the founder, lead guitarist, lead vocalist and songwriter of the British rock band Porcupine Tree, as well as being a member of several other bands. 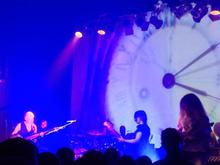 117 users have seen Steven Wilson including: