Shesarebelx13 has seen We The Kings 1 time. 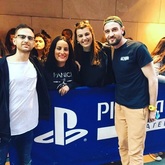 1306 users have seen We The Kings including: