Bonnie Hayes is an American singer from California, USA. In 1982 Hayes released her first album entitled Good Clean Fun, a new wave/rock offering, under the band name Bonnie Hayes with the Wild Combo. She is a sister of Chris Hayes, former lead guitarist of Huey Lewis & The News. 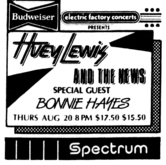 Huey Lewis and the News / Bonnie Hayes
Uploaded by Zimtrim

5 users have seen Bonnie Hayes including: