Turnstile is a hardcore punk band that formed in Baltimore in 2010. The band released dropped its debut album "Nonstop Feeling" in January 2015. Subsequently, Superheaven supported Turnstile's first headline tour across the East and West Coast of the United States. "Time & Space," the band's second studio album, was released in 2018 and was the first to peak at number one on Billboard's Heartseekers Albums chart. In support of the album, Turnstile embarked on its first international tour through the US, Europe, and Southeast Asia. Turnstile's third studio album "Glow On" followed in 2021 and was the first to chart on the Billboard 200 chart. It was additionally named the eighth greatest album of 2021 by Rolling Stone magazine. In 2022, Turnstile toured with My Chemical Romance on its North American Reunion Tour and will support blink-182 during its 2023 World Tour. 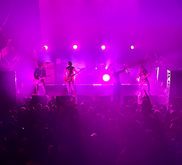 1807 users have seen Turnstile including: