Staind is an alternative metal band formed on November 24, 1995 in Springfield, Massachusetts, United States. After meeting through friends and covering pop hits of the day in smalltime clubs for a year and a half, Staind self-released their debut album, Tormented, in November 1996, citing influences in brutal latin thrash metal. Until recently, the album was difficult to obtain, as only four thousand copies were originally sold. Since then, the band's official website has released the album to meet the demand from fans. 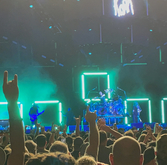 1132 users have seen Staind including: